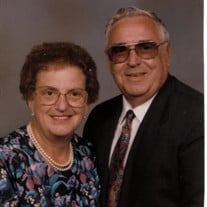 Wilma Lois (Sell) Shafer, 89, of Carrollton passed away Monday evening October 12, 2020 at the golden Age Retreat in Carrollton. A daughter of the late John Chalmer and Icie Lowella Borland Sell, she was born May 13, 1931 in Minerva, Ohio. Wilma was a 1950 graduate of Augusta High School, during which time she worked Isaly’s. It was while working at Isaly’s that she met Willard Shafer, whom she would be married to on September 15, 1950. Other jobs Wilma worked included Ashton’s 5&10, Big Plus and lastly TRW/PCC. When not working she enjoyed the outdoors, camping, taking care of her gardens and flower beds, and spending time with family. After retirement her and Willard enjoyed their winters for 20 years in Lake Wales, Florida. Wilma held memberships in the Red Hat Society and at the Carrollton Church of Christ Christian Disciples. She is survived by her son, Willard “Lee” Shafer Jr.; two grandsons, Jerry (Laura) Shafer and Darrell Shafer; five great grandchildren, Mikala, Kaden, Ellie, Emma, Erin Shafer; two brothers, Raymond Sell and Kenny (Naomi) Sell; and a sister, Ether Sell. Along with her parents she was preceded in death by her husband, Willard L. Shafer Sr., on July 20, 2018, three siters, Viola (Fred Dowdell and Carl Easterday) Easterday, Edith (Johnny) Morvatz, and Dolores (Gary) Wagner, an infant brother, Wilbur Sell, and a sister-in-law, Tilly Sell. Due to public health concerns there will be no public services and a private graveside services will be held at Westview Cemetery in Carrollton. The family wishes to extend a special thank you to all the wonderful caregivers at the Golden Age Retreat. In lieu of flowers please make donations in Wilma’s name to the Carroll Golden Age Retreat 2202 Kensington Road NE, Carrollton, Ohio 44615, or Community Hospice, 716 Commercial Ave SW, New Philadelphia, Ohio 44663.

Wilma Lois (Sell) Shafer, 89, of Carrollton passed away Monday evening October 12, 2020 at the golden Age Retreat in Carrollton. A daughter of the late John Chalmer and Icie Lowella Borland Sell, she was born May 13, 1931 in Minerva, Ohio. Wilma... View Obituary & Service Information

The family of Wilma Lois (Sell) Shafer created this Life Tributes page to make it easy to share your memories.

Send flowers to the Shafer family.