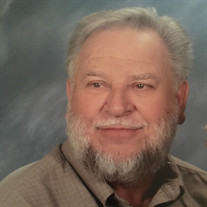 William E. “Bill” Warner, 74, of Louisville, formerly of Carrollton, died Thursday evening December 14, 2017 at the Carroll Healthcare Center in Carrollton. Born in Barberton, Ohio on March 29, 1943, he was a son of the late Charles and Audra Shafer Warner. A licensed barber, Bill had formerly operated his own barbershop in Carrollton and was a retired employee of the Carrollton Exempted Village Schools. He was a member of the Louisville Eagles Club. He is survived by two sons, Todd (Justine) Warner of Clyde, Ohio and Tyler (Wendy) Warner of Spencer, Tennessee; a daughter, Tammy (Will) Long of Carrollton; two step-daughters, Wendy Monegay of Louisville and Kelly Green of Hartville; seven grandchildren; four great grandchildren; seven step grandchildren; four brothers, Larry Warner of Carrollton, Don Warner of Carrollton, Myron Warner of Carrollton, Dennis Warner of Canton South; and a sister, Susan Shellock of Bolivar. Bill was preceded in death by his first wife, Janet, in 1989; his second wife, Loraine, in 2016; and brother, Richard “Dick” Warner. Funeral services will be Saturday, December 23, 2017 at 11:00 a.m. at Mt. Pleasant United Methodist Church near Carrollton with Rev. Steve Smith officiating. Burial will follow in Mt. Pleasant Cemetery. Visitation will be Saturday morning from 9 a.m. until time of services in the church.

The family of William "Bill" Warner created this Life Tributes page to make it easy to share your memories.

Send flowers to the Warner family.