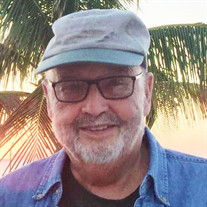 Thomas Paul Herbert, 83, of North Canton, passed away in his home after a lengthy illness, Thursday, November 12, 2020. Son of the late Wilfred and Jeanette Herbert, he was born November 4, 1937 in Canton, Ohio. Tom’s entire working career was in the electrical field. Starting as an electrician at age 16, he earned a Bachelor’s Degree in Electrical Engineering from the University of Dayton followed by a Master’s Degree in Engineering from Penn State University. He worked for 8 years as an electrical systems designer for AEP, followed by 25 years as a Professor of Engineering Technology. He retired from the University of Akron in 1993 as Professor Emeritus of Engineering Technology and immediately started consulting for electric utilities until his retirement in 2017. Tom consulted for many Ohio Municipal Electric Utilities and was honored to have a substation named after him in Monroeville, Ohio. In 1972, Tom and his wife Marcy started Herbert’s Pine Hollow Farm in Carrollton. With the help of their children and grandchildren, they continue to grow the business from its original several hundred trees. Tom loved attending the Carroll County Fair, looking at farm equipment and seeing people he knew from town. In addition to the farm work, there are fond memories of working the Christmas tree lot with the occasional snowball fight, riding in the North Canton parade in the farm truck and spending weekends at the farm. Of all of Tom’s accomplishments, he is most proud of his talented children, and the way they and their spouses have splendidly raised his grandchildren. His interests included traveling to New York City with his wife, seeing Broadway shows, playing and watching baseball, watching his grandchildren do just about anything, sharing the farm with family and friends, and appreciating a good auction. Whether traveling or at home, he always read a local newspaper to keep apprised of community news. He is famous for his delicious grilled chicken and sweet corn. He valued his lifelong friendships with his University of Akron colleagues, his childhood friends “The Canton Kids”, and his friends and neighbors in Carrollton. Most of all, he enjoyed over 40 annual family beach trips where he spent quality time with the family. Tom and Marcy would sit in the shade watching the festivities with the ocean in the background. Probably more than the company, he enjoyed quickly winning a post dinner Euchre game. We are thankful for his lessons, guidance, friendship, advice, quick wit and willingness to always help people. He is survived by his wife of 61 years, Marcia Anne Herbert; five children: David (Denise) Herbert of Canton, Mark (Karen) Herbert of Columbus, Jeanne (Rick) Zimmerman of Green, Lisa (Scott) Vaughn of North Canton, and Krista (Mark) Kinsley of North Canton; nine grandchildren: Corie Herbert, Greg (Bailee) Herbert, Maddie (Max McGarity) Herbert, Mark (Angela Ciocca) Zimmerman, Doug Herbert, Julia (Justin) Vaughn Crone, Briana Kinsley, Jack Zimmerman, and Kelsey Kinsley; great grandchildren: Haley Jenkins-MacEwan and Myles Herbert; and one sister, Betty Maher of Redford, Michigan. Due to Covid, there will be no calling hours. Graveside services will be private. At Tom’s request, once Covid restrictions permit, a Celebration of Life will be held for family and friends. In lieu of flowers, Tom requested that donations be made in his name to Carrollton Exempted Village Schools, 252 Third St. NE, Carrollton, Ohio 44615 for the Nutrition/Weekend Backpack Program.

Thomas Paul Herbert, 83, of North Canton, passed away in his home after a lengthy illness, Thursday, November 12, 2020. Son of the late Wilfred and Jeanette Herbert, he was born November 4, 1937 in Canton, Ohio. Tom&#8217;s entire working... View Obituary & Service Information

The family of Thomas Paul Herbert created this Life Tributes page to make it easy to share your memories.

Thomas Paul Herbert, 83, of North Canton, passed away in his...

Send flowers to the Herbert family.