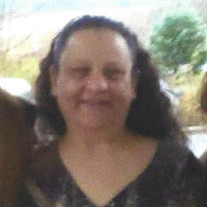 Teresea Ann Hauenstein Ritchie, 51, from Carrollton, passed away Tuesday afternoon December 5, 2017 unexpectedly at home. Born August 30, 1966, in Canton, she was a daughter of Patricia (McArthur) Campitelli of Carrollton and the late Donald Eugene Hauenstein. She was a graduate of Carrollton High School, class of 1983. She worked at Command Plastic Corp in Tallmadge for about a year and was a resident of Akron. She was a cancer survivor, 2013. She absolutely loved Tony Stewart and enjoyed all activities related to NASCAR. She enjoyed watching and rooting for the Carolina Panthers. She also enjoyed bowling, camping, and fishing. Most of all, she enjoyed spending time with family and friends and LOVED being on Facebook. Teresea is survived by three sons, Chris (Michelle) Ritchie of Salisbury, NC, Chad (Alex) Ritchie of Mooresville, NC, Harold Ritchie of Moorseville, NC; daughter, Tiffany (Gerardo) Ritchie of Mooresville, NC; six grandchildren, Elise, Gabriel, Gabriella, Ruthy, Sofia, Blaze and Mavis all of Mooresville, NC; three sisters, Donelle (Dwayne) Kiser of Midland, NC, Mareva (Douglas Ott) Karas of Mooresville, NC, and Angela Hauenstein of Marshall, TX; several aunts, uncles, nieces and nephews. Along with her father she was preceded in death by her husband, Nelson Ritchie, in 1995. Funeral services will be Friday, December 8, 2017 at 3 p.m. in Dodds Funeral Home of Carrollton with Rev. Dr. Michael Doak officiating. Burial will follow in Westview Cemetery in Carrollton. Visitation will be Friday from 2 p.m. until time of services in the funeral home.

Teresea Ann Hauenstein Ritchie, 51, from Carrollton, passed away Tuesday afternoon December 5, 2017 unexpectedly at home. Born August 30, 1966, in Canton, she was a daughter of Patricia (McArthur) Campitelli of Carrollton and the late Donald... View Obituary & Service Information

The family of Teresea Ann Hauenstein Ritchie created this Life Tributes page to make it easy to share your memories.

Send flowers to the Ritchie family.