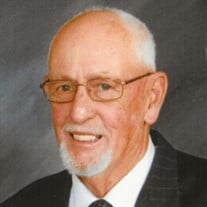 Stanton G. Thomas, 86 of Carrollton, OH, passed away January 25th, 2021 at Compassionate Care Woodlawn in Canton, OH. A son of the late Roger and Margaret Thomas, he was born in Portsmouth, OH on November 20, 1934. Stanton graduated from Ravenna High School in 1952, and Michigan State University in 1957 with a degree in Forest Products. He was a First Lieutenant in the United States Navy and was training to be a pilot when he left the service in 1958. Stanton married Janet Boggs in 1959 in New Harrisburg, OH. Stanton worked in the lumber company business in Illinois, Michigan and Ohio before returning to finish his Master's degree at Michigan State in 1971 and changing careers to teaching science and math at Ravenna and then Carrollton schools. He was a long time football and basketball coach for both junior high and high school while teaching at Carrollton. He and Janet also farmed several hundred acres on family farms in Fremont, OH, and Jasmine Rd & Canyon Rd in Carroll County, OH. Stanton was a long time member and elder of the New Harrisburg Presbyterian Church and currently attended the Mt. Pleasant United Methodist Church. He was a former member of the Carroll County 4H Advisory Council, Farm Bureau Advisory Council, Carroll Hills Industry Board, Rotary Club, State and National Teachers Education Assoc., Mayflower Society, And Alpha Gamma Rho fraternity. In retirement Stanton’s focus was on mission work in Haiti. He visited the island 14 times, primarily with the Carrollton Haitian Team in Pignon, but occasionally went on other mission trips in support of other Haitian projects. He helped provide assistance to a Haitian student to complete his medical degree who was instrumental in supporting the construction of a large hospital and also a pastor who helped construct a church in the northern city of Cap Haitian along with construction of a school in southern Haiti in Jacmal. After retiring, Stanton and Janet enjoyed spending their winters in Florida for the past 20+ years and he developed a passion for kayaking, and personally constructed three of his own wooden kayaks in his basement. Biking, hiking and kayaking in the winter in Florida, and farming the rest of the year filled his time. Stanton was preceded in death by a sister, Janet LaVergne of Sidney, OH. He is survived by his wife of 61 years, Janet (Boggs) Thomas; 2 sons - Jeffrey (Deb) Thomas, Roger (Jennifer) Thomas; 5 grandchildren - Jarod (Ashley) Thomas, Seth (Kimberly) Thomas, Carson Thomas, Erin (Acacia) Parchert, Lincoln (Meaghan) Parchert; 4 great grandchildren - Gavin & Preston Thomas and Bradley & Jacob Parchert. Stanton is also survived by his brother, Warren (Shirley) Thomas of Buffalo, NY and many nieces and nephews. A private grave side family service was held at the New Harrisburg cemetery due to the current health concerns with the covid pandemic. Memorial contributions in Stanton’s name may be sent to Mission for Haiti, Inc. (2123 Old Spartanburg Rd., Greer, South Carolina, 29650), or the Mt. Pleasant United Methodist Church (89 Canyon Rd. SW, Carrollton, OH, 44615).

Stanton G. Thomas, 86 of Carrollton, OH, passed away January 25th, 2021 at Compassionate Care Woodlawn in Canton, OH. A son of the late Roger and Margaret Thomas, he was born in Portsmouth, OH on November 20, 1934. Stanton graduated from Ravenna... View Obituary & Service Information

The family of Stanton G. Thomas created this Life Tributes page to make it easy to share your memories.

Send flowers to the Thomas family.