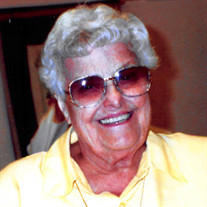 Sister Mary Robert (Jeanne) Bricker, 93, Sister of Our Lady of Charity of the Good Shepherd, went home to her heavenly Father July 8, 2018. Born January 14, 1925 in Salem, Ohio, the daughter of Thomas L. and Agnes J. O’Connor Bricker. A 1944 graduate of Salem High, she was employed by the Bricker and Bricker Construction Company of Salem as a bookkeeper and estimator. She was a member of St. Paul’s Catholic Church, active in the Catholic Daughters of American, and the Legion of Mary and Girl Scouts. She cared for her mother in the last years of life. In 1961 Sister entered the convent in Carrollton, Ohio, where she was residential caregiver to challenged boys at the Villa. Sister became the manager of the Culinary Department at St. John Vianney Seminary, Bloomingdale. Having worked there for 16 years, she has served many of the priests of the Steubenville Diocese. Upon closure of the seminary Sister was Administrator Assistant for The Vianney Center before returning to the motherhouse. Sister was a member the Council, Assistant Administrator, Bookkeeper and Local Superior. She served as Dietary Supervisor at Good Shepherd Nursing Home, Wheeling, West Virginia and was a child caregiver, Delray Beach, Florida. Returning to Carrollton, she was the bookkeeper unitl she was 85. Sr. Robert “Aunt Jeanne” was cherished by her family for her strong faith, motherly advice and spiritual encouragement. Her service to others was their inspiration. In addition to her parents, Sister was preceded in death by both her brothers, Robert and Archie. She is survived by the Sisters of Our Lady of Charity of the Good Shepherd; several nieces, nephews and numerous grand and great grand nieces and nephews. The Sisters will receive family and friends at the convent Wednesday, July 11 from 4-7 p.m. and Thursday, July 12 from 9:30 a.m. until the 11 a.m. Mass of Christian Burial. Interment will follow in the Sisters’ Cemetery. In lieu of flowers, memorials may be made to the Sisters of Our Lady of Charity of the Good Shepherd Mission Fund, PO Box 340, Carrollton, Ohio 44615.

The family of Sister Mary Robert Bricker created this Life Tributes page to make it easy to share your memories.

Sister Mary Robert (Jeanne) Bricker, 93, Sister of Our Lady of...

Send flowers to the Bricker family.