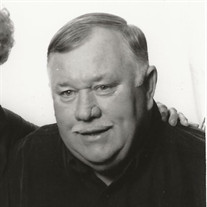 Robert Earl Buck, 76, of Carrollton, passed away in his sleep on January 8, 2021, at Aultman Hospital in Canton, Ohio. Son of the late Earl and Jennie Rokos Buck, he was born March 8, 1944, at Aultman Hospital in Canton, Ohio. Robert graduated from Sandy Valley High School in 1962 and was studying at Kent State University when he enlisted and was proudly called to serve his county in the United States Air Force from 1966 to 1970, followed by two years in the Reserves. A lifelong resident of Carroll County he served 12 years as Township Trustee for Union Township and managed the Carroll Landmark for 23 years. He was a member of St. Paul’s Lutheran Church, the American Legion, the Farm Bureau, Ohio Township Association, and Atwood Yacht Club, and was a 32nd degree Mason of the Carrollton Blue Lodge #124, and Shriner. During his life Robert enjoyed watching Ohio State football, hiking, boating, fishing, traveling, and rescuing cats. He was also elected in 1978 to serve the Carroll County Republican Party as the Central Committeeman and enjoyed organizing the yearly banquets and Fair Booth at the Carroll County Fair. He was honored as Carroll County Republican of the year in 2009. He is survived by his loving wife, Dianne, whom he would have been married to for 54 years on April 1, 2021; sister, Linda (Guy) Avellon of Lake Barrington, IL; two nephews, Tom (Amanda Baker) Avelon of Tampa, FL and Dr. Nathaniel H. Poorman and his daughter Julia Poorman of Basking Ridge, NJ; and three nieces, Kimberly (Peter) Braid and their children, Mason, Brody, and Marielle of Round Lake IL, Kelley (Andrew Burch) Bevington of Nashville, TN, and Lisa Burch and her son Ethan of Newark, DE. Along with his parents, Robert was also preceded in death by his mother and father-in-law, G. Howard and Geneve F. Poorman. Due to the Covid-19 pandemic, no services will be held at this time. A memorial service will be held later this year for family and friends to celebrate his life. In lieu of flowers, the family requests that donations be made in Robert’s name to the Bell-Herron Scholarship Foundation.

The family of Robert Earl Buck created this Life Tributes page to make it easy to share your memories.

Robert Earl Buck, 76, of Carrollton, passed away in his sleep...

Send flowers to the Buck family.