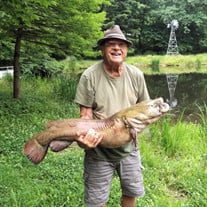 Richard “Scooter” Hartmann, 85, of Carrollton, passed away February 1, 2021 at Aultman Hospital in Canton, Ohio. The son of the late Eugene and Erma (Ruby) Hartmann, Scooter was born in Houston Hollow, Scioto County, Ohio, on April 4, 1935. Scooter graduated from the last class of Canal Fulton High School in 1953. He served in the United States Army, with a stint in Germany, from December 1954 to December 1956. He did basic at Fort Campbell, KY and served for a time with the paratroopers before finishing his service in the tank division. Scooter married Elaine “Ellie” Kaiser at the home of her brother on February 23, 1963. They spent 57 years loving their children and their families: Jessica (Tommy) Secrest, Dr. Richard (Celia) Hartmann II, and grandchildren, Tommy II and Ellie Secrest, and Elizabeth and Victoria Hartmann; as well as his brother, Charles “Buddy” Hartmann; and sister Tana (Carl) Williams. Along with his parents, he was preceded in death by his brother Steven Hartmann and sister Rosella “Red” (Hartmann) Lindeman. Scooter blessed and supported his family working at Republic Steel in Massillon where he retired after 33 years. He worked for a time at Buckeye Sports in Canton, first as a sales clerk and finally as a gunsmith. He was a life-long learner, taking classes for autobody, astronomy, and earning a certificate in electronics. An avid sportsman, Scooter loved being outdoors hunting, fishing, swimming, skiing (both water and cross-country), gardening, or just walking his dogs. He had a quiet way with animals, and they tended to gravitate to him. He knew the birds and their songs, as well as the different plants and trees. Scooter enjoyed sports of all kinds, both playing and watching them. In recent years, he joined a bowling team. On Mondays and Fridays, up until December, you could find him at the bowling alley. Scooter was a lifelong member of the NRA, Malvern American Legion, the Farm Bureau, and US Steel Worker’s union. A service for family and friends was held at First Christian Church of Malvern (4046 Coral Rd NW, Malvern) at 11am Friday, February 5.

The family of Richard "Scooter" Hartmann created this Life Tributes page to make it easy to share your memories.

Send flowers to the Hartmann family.