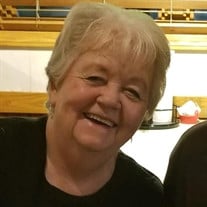 Patricia Ann (King) Thomas (76), born June 24, 1942, a daughter of the late Margaret and Harold King, passed away peacefully surrounded by her family on February 27, 2019, following a brief illness. Pat may have been your friend in elementary school where she and her brother were part of eight sets of twins, the quiet one in your high school class, and it is possible she created the desserts for your most important occasions during her thirteen years as head baker at Riesbeck’s in St. Clairsville. When she made her home in Kilgore and mothered her girls she was the PTO president, the girl scout leader, an integral part of Kilgore Junior Women’s club, the coach’s wife ,your church youth leader, a speech team mom and judge, high school musical helper, and always the planner and doer everyone could count on. She poured her heart and soul into making Kilgore Methodist Church a warm and welcoming place. As if there were not enough opportunities to know Pat, you may have crossed her path as she and Lew created Pat and Lew’s crafts traveling to shows and festivals for 20 years meeting countless friends and having great adventures. She was your poll worker for many years and thoughtfully participated in the process. In most recent years, her stories and her time would turn to her six grandchildren, loving them, giving them an invaluable relationship that has fed the individuals they are, and celebrating and experiencing their every milestone and accomplishment. Pat moves on leaving her husband of 46 years, Lew, who took great care of meeting her every need and making her illness as small a part of the everyday as possible. Daughter Barb Lawrence of Carrollton, and daughter and son-in-law Krissie and Jimmy Richards of Strasburg. Six grandchildren remain, Gabby, Kara, and Travis Lawrence, and Maggie, Ada, and Millie Richards. Pat also leaves her kitties at home who were the brightness in her most recent days and the characters of her stories as well as Tessa, her chocolate lab who loved her and watched over her stoically. She is survived by her twin brother, Mike (Linda) King of St. Clairsville, and her sister Faye Carter of Lloydsville, as well as a brother-in-law (Wayne Rinkes), sister-in-law (Patti King), and many nieces and nephews. Pat was preceded in death by a son-in-law (RC Lawrence III), three sisters( Betty McMahon, Jane Rinkes and Pauline Brestle), and a brother (Wayne King). A memorial service for Pat will be held Saturday, March 2, 2019 at 1 p.m. in Dodds Funeral Home of Carrollton with Pastor Mark Thomas and Pastor Eric Kluth officiating. Visitation will be Saturday from 11 a.m. until time of services. In lieu of flowers donations may be made in Pat’s name to The Carroll County Animal Protection League, PO Box 353, Carrollton, Ohio 44615.

Patricia Ann (King) Thomas (76), born June 24, 1942, a daughter of the late Margaret and Harold King, passed away peacefully surrounded by her family on February 27, 2019, following a brief illness. Pat may have been your friend in elementary... View Obituary & Service Information

The family of Patricia Ann (King) Thomas created this Life Tributes page to make it easy to share your memories.

Send flowers to the Thomas family.