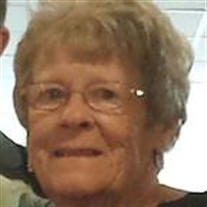 Nancy K. Galbraith, 77, of Carrollton passed way early Wednesday morning January 4, 2017 at Amberwood Manor in New Philadelphia. Daughter of the late Ted and Mary Eva Potts Lowdermilk, she was born February 10, 1939 in Lee Township, Carroll County. Before retiring Nancy worked as an abstractor for the John Saltsman Law Office in Carrollton. She was also a member of the Carrollton United Presbyterian Church. Nancy enjoyed gardening, playing cards, and taking her grandkids shopping and out to lunch. She will always be remembered for the love she had for her children and grandchildren and for being the grilled cheese grandma. Her home had an open kitchen that her grandchildren and all their friends would come to enjoy a grilled cheese and Mt. Dew. She is survived by her son, Bob (Kim) Galbraith of Carrollton; daughter, Susan (Lewis) Ericksen of Sherrodsville; granddaughter, Hillary (David) Stanton; five grandsons, Luke (Cynthia) Galbraith, Jim and Joe Galbraith, Christopher and Stephen Ericksen; two brothers, John (Judy) Lowdermilk and Michael Lowdermilk; and two sister-in-laws, Anne (Earl) Wright and Beverly Galbraith. Along with her parents she was preceded in death by her husband, Frank Malcolm Galbraith, whom she married August 17, 1963, and by a brother-in-law, Arch Galbraith. Funeral services for Nancy will be Friday, January 6, 2017 at 1 p.m. in Dodds Funeral Home of Carrollton with Rev. Kimberly Arbaugh officiating. Burial will follow in Westview Cemetery in Carrollton. Visitation will be Friday from 11 a.m. until time of services. In lieu of flowers the family wishes donations be made in Nancy’s name to Community Hospice, 789 N. Lisbon Street, Carrollton, Ohio 44615.

The family of Nancy K. Galbraith created this Life Tributes page to make it easy to share your memories.

Send flowers to the Galbraith family.