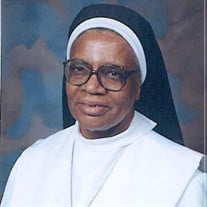 Sister Mary Annunciata Mason, a Sister of Our Lady of Charity of the Good Shepherd, died peacefully on Tuesday, August 24, 2021, at the Convent in Carrollton, Ohio. Born in Chicago, Illinois on December 14, 1930, Sr. Mary Annunciata entered the convent on July 16, 1961 in Carrollton Ohio, professed her temporary profession in 1964 and final profession in 1967. She was preceded in death by her parents, Thomas Stewart Beecher Mason and Anna Bernadette Wilson, brothers Thomas and Harold and sister Mariana. Sister Mary Annunciata received a B.S. Education Degree at Chicago State University in 1953, a child care certificate at New York, NY in 1964, and M.S. in Special Education at Marywood University at Scranton, PA in 1976. Sister served as a teacher and a principal in both public and Catholic elementary schools in Brooklyn, NY and Chicago, IL. She also participated in summer parish work with religious education and social service outreach. Sister ended her formal teaching career at St. Edward Catholic Central High School, Carrollton, OH. From 1961 through 1997 Sister ministered at St. John’s Villa as the residential supervisor of the girls, Director of Special Services, and as General Supervisor of Residents. She was instrumental in establishing and directing Caritas House for victims of domestic abuse. Sister Annunciata was active in the Carrollton area, serving on Carroll County’s F.E.M.A. Board, MR/DD Supportive Living Advisory Council and Harcatus—Carroll/Tuscarawas/Harrison Counties. In addition to some years as Novice Director, she served her community in leadership. Sister was known for her artistic abilities in photography and ceramic painting and was the face of the monthly Seafood Dinners and catering. She graciously stepped in to assist her community in any need. Her cheerful presence and sense of humor will be greatly missed. Sister Mary Annunciata is survived by her community, The Sisters of Our Lady of Charity of the Good Shepherd. Viewing will take place at the Carrollton Convent Chapel on Friday, August 27, 2021, from 11:30am—12:40pm followed by Mass of Christian Burial at 1:00pm. In lieu of flowers, donations may be made to the Sisters of Our Lady of Charity of the Good Shepherd, PO Box 340, Carrollton OH 44615.

Sister Mary Annunciata Mason, a Sister of Our Lady of Charity of the Good Shepherd, died peacefully on Tuesday, August 24, 2021, at the Convent in Carrollton, Ohio. Born in Chicago, Illinois on December 14, 1930, Sr. Mary Annunciata entered... View Obituary & Service Information

The family of Sr. Mary Annunciata Mason created this Life Tributes page to make it easy to share your memories.

Sister Mary Annunciata Mason, a Sister of Our Lady of Charity...

Send flowers to the Mason family.