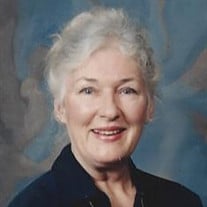 Joy wrote her own obituary, which is not unusual if you happened to know her: “Don’t worry about me, don’t be sad, love your family and friends, and look for the beauty in everything – this will be how to know I’m still with you.” Joy departed this world surrounded and cared for by her beloved children. She was 83, and was full of laughter, song and humor. She had a feisty spirit until the very end. She was the devoted wife of her late husband H. David Rose, and her children: Martha Joy Rose, Harry David Rose III and Darton Scott Rose - She considered each one her favorite. She had nine grandchildren and two great -grandchildren whom she adored - she considered each one her favorite as well. In addition to being the family matriarch, Joy led a life of extraordinary adventure. She canoed over 1,200 miles of American rivers, spent 4 glorious summers as a fire lookout in Montana, went camping every single summer for 55 years, drove a school bus to help put her children through college, hitch-hiked through Scotland with her son David, canoed the Freight Train rapids with her son Darton, cruised to Alaska and the Panama Canal with her daughter Joy, bicycled through the Netherlands at age 65, and helped her husband build their house in Salineville from the ground up; surveying, laying brick, mixing concrete and putting up cedar siding and a roof. She advises against this particular adventure. Originally from West Haven, Connecticut, she was the daughter of Florence and Darton Greist. She’ll be happy to see them again. Joy leaves behind many cherished friends, her brother Darton Greist Jr., her close-knit church community, and a loyal and loving family. Her only regrets in life are that she never canoed the Allagash River, learned to yodel, or do the tango. She was often called a beautiful spirit by those who knew her. A celebration of life memorial will be held on Friday April 22nd at 4:30 PM at the Carrolton Church of Christ. In lieu of flowers donations may be made to made to Community Hospice of Salem.

The family of Joy Greist Rose created this Life Tributes page to make it easy to share your memories.

Joy wrote her own obituary, which is not unusual if you happened...

Send flowers to the Rose family.