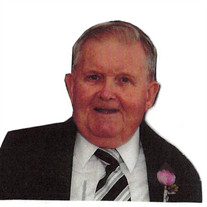 Joseph Allen (Joe) Johnston of Carrollton, Ohio, died February 17, 2018. He was 92. Born July 16, 1925, he is survived by his wife of 68 years, Janet MacDonald Johnston of Carrollton; son, Joseph Clark Johnston (LuAnn) of Whiteville, NC; daughter, Anne Lawrence (Simon) of Hampstead, NC; daughter-in-law, Beth Johnston of Carrollton; sister, Carol Kaufman (Robert) of Salem, Ohio; brother, Richard Timothy Johnston (Margaret) of Jamestown, Ohio; brother-in-law, Alan Menlo, of Ann Arbor, MI. Also, grandchildren, Alexis Johnston Bachrach (Eric) of Richmond, VA; Sarah Johnston Parks (Mark) of Wilmington, NC; Angela Johnston Cannon (Joseph) of Asheville, NC; Eric Johnston (Dana) of Saluda, NC; Summer Elisabeth Lawrence of Knoxville, TN; Sydney Michelle Lawrence of Chapel Hill, NC. Great-grandchildren include Shannon, Collin, Madeline, Allison and Joan - all of North Carolina. He was preceded in death by his eldest son, Charles Allen (Chuck) Johnston; parents, Wilma Grace and Allen Thurman Johnston;sister, Marilyn Meno and brother-in-law, Roderick MacDonald. Joe graduated from Carrollton High School and proudly served his country in the US Navy from 1943-1946. He was a member of the First Presbyterian Church of Carrollton and former member of the Carrollton Rotary Club. Following in the footsteps of his father, he owned and operated the City Meat Market with an iron clad work ethic. His commitment to customer service was evident long before it became a trend. There were three additional pillars that he held dear: his family's welfare, golfing, and rooting for the Pittsburgh Steelers and Pirates. If all these things were known to be in harmony, he might mark the moment with an occasional Jameson on ice, sitting dutifully on a coaster next to his favorite recliner. At age 63, Joe hung up his butcher's apron for the last time. In his retirement, he would revel in time spent with his beloved family, friends, and golfing buddies. We have lost someone very special whom we held with the greatest affection and respect. Visitation will be held Tuesday, February 20, from 4-6 pm at Dodds Funeral Home in Carrollton. The funeral service, to be officiated by Rev. Michael Doak and Rev. Roderick MacDonald, will be held Wednesday, February 21 at 11:00 am at Dodds Funeral Home with internment following at Westview Cemetery in Carrollton. In lieu of flowers, memorial donations may be made to First Presbyterian Church Sharing Bread Program, 200 North Lisbon Street, Carrollton, Ohio 44615.

The family of Joseph (Joe) Allen Johnston created this Life Tributes page to make it easy to share your memories.

Send flowers to the Johnston family.