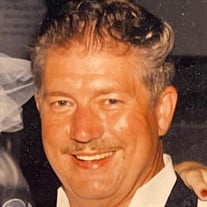 Johnny Eugene Lairson, 77, of Carrollton passed away December 16, 2021 at Weirton Medical Center in Weirton, West Virginia. A son of the late Frederick and Ruth Cochran Lairson, he was born May 12, 1944 in Jewett, Ohio. Johnny was retired... View Obituary & Service Information

The family of Johnny Eugene Lairson created this Life Tributes page to make it easy to share your memories.

Send flowers to the Lairson family.