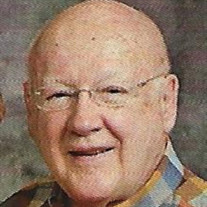 Attorney John Kenneth Saltsman, 90, of Carrollton Ohio passed away peacefully at Centerville Village on the morning of Wednesday, March 31. He was born March 6, 1931 in Canton Ohio to attorney Isaac Kenneth and Dorothy Jane McDonald Saltsman. He was an active member of the Carrollton First United Methodist Church. Following graduation from Carrollton High School in 1949, Saltsman attended Mt. Union College and served four years with the United States Air Force. He also worked at the Huntington Bank Company in Columbus while attending law school at Ohio State University. He joined the local law firm of Saltsman and Saltsman, Jan 9, 1959, then composed of his father I.K. Saltsman, his uncle, R.T. Saltsman. He practiced law in Carrollton from 1959 to 1999. When he retired, he found his second calling in mentoring younger men. He married the former Carol Chenoweth of Saginaw, Michigan, May 23, 1959, and since then they lived in Carrollton and raised two sons, Bill and Jim, in this community. He enjoyed creating and tasting fine food and held an appreciation for collecting and creating art and music. He enjoyed gem cutting, cross stitch, calligraphy, and gardening along with singing in the choir and playing the organ and piano. Especially memorable to family are their many backpacking trips to the Western United States. He was actively involved in the Carrollton Rotary, serving as president for two terms. Family and friends remember him for his wry and playful humor. He is predeceased by parents Isaac Kenneth and Dorothy Jane McDonald Saltsman and son William Edward Saltsman. He is survived by his wife of 61 years, Carol E. Saltsman, son James R. Saltsman and wife Denise of Morgantown, PA, grandchildren Heidi Saltsman, Trevor Saltsman, Megan Saltsman, and Andrew Saltsman, and brother Robert R. Saltsman of Nokomis Florida. Funeral services will be held Saturday, 11am at the First United Methodist Church in Carrollton, with visitation at the church from 10am until service time. Burial will follow at Westview Cemetery in Carrollton. In lieu of flowers, memorial donations may be made in John’s name to the Salvation Army.

The family of John Kenneth Saltsman created this Life Tributes page to make it easy to share your memories.

Send flowers to the Saltsman family.