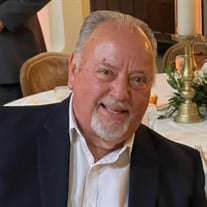 John T. Lutton, 78, of Carrollton, passed away at his home on Monday, February 14, 2022. A son of the late John and Agatha Lutton, he was born on June 27, 1943 in East Liverpool, Ohio. John is survived by his wife of 56 years, Pam (Brammer) Lutton; his son, Jonathan (Leslie) of Northville, Michigan; three grandchildren, Gavin, Hailey, and Lia; brothers-in-law, Jack (Pat) Brammer, Gary (Patty) Brammer, and several very special nieces and nephews. He was preceded in death by his parents, his twin daughters, and sister, June (Gene) Clark. John loved coaching his son in Little League baseball, then cheering him on throughout his baseball career. He also enjoyed being with his family, playing cards, and gardening. Services will be held at 6:00 p.m. on Thursday, February 17, 2022 at Dodds Funeral Home in Carrollton officiated by Pastor Jim Painting. Visitation will be held on Thursday from 4:00 p.m. until the time of services.

The family of John T. Lutton created this Life Tributes page to make it easy to share your memories.

Send flowers to the Lutton family.