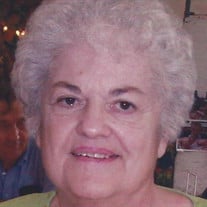 Jean Hosey, 80, of Carrollton died Thursday evening April 14, 2016 in her home following a brief illness. Born December 2, 1935 in Phoenix, Arizona she was a daughter of the late Eugene Thomas Sharrit and Edna Whytsell Sharrit. Jean was member of the Carrollton Bible Chapel, and was retired from the Carrollton Schools where she worked in the cafeteria. She is survived by her husband, Everett “Pete” Hosey, whom she married December 15, 1956; a son, Steve Hosey of Carrollton; three daughters, Diann (Craig) Sparr of Stow, Ohio, Amy Hosey of New Kensington, Pennsylvania, and Maryellyn (Michael) Monigold of Carrollton; eight grandchildren; eight great grandchildren; a brother, Thomas Eugene Sharrit of Florida; and a sister, Lenora Devitt of Carrollton. Along with her parents, she was preceded in death by a sister Funeral services will be Monday, April 18, 2016 at noon in the Carrollton Bible Chapel with Pastor Chuck Wilson officiating. Burial will follow in the Harlem Springs Cemetery. Visitation will be Monday from 10 a.m. until noon at the church. Memorial donations in Jean's name may be made to the Community Hospice Association, 789 North Lisbon Street, Carrollton, Ohio 44615, or click here: https://www.myhospice.org/how_you_can_help/donate-to-hospice.php

The family of Jean Hosey created this Life Tributes page to make it easy to share your memories.

Send flowers to the Hosey family.