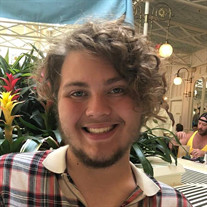 Jared Devin DeGarmo entered the stage on September 18th, 2001. He was unapologetically himself, fiercely unique, and had a theatrical singing voice he loved to use anytime, anywhere. Jared believed in the power of positivity. He was accepting and supporting of everyone, empowered others through thoughtful words and letters, and spread his unconditional love and humor to everyone he met. Jared lived his life on the stage. As a recent 2019 CHS graduate, Jared’s high school career was adorned with awards from his various involvements. He was in Speech & Debate, and performed in numerous plays, including his senior role as Rafiki in The Lion King. Jared was bright and intelligent; a member of the Academic Hall of Fame, National Honor Society, CHS Club, and French Club. His flair for dramatics led him to also be in the Chamber Choir, P.L.A.Y, and the CHS Marching Band. Jared was enrolled in the University of Toledo’s Education program and would one day be an English teacher. We want to thank his teachers and mentors who guided him throughout the years and showed their unwavering support. Jared took his final bow on September 4th, 2020 after a courageous battle with Leukemia. Our family would like to send a special thank you to his wonderful team of doctors, nurses and staff members at the Cleveland Clinic. Jared is survived by his Mother, Rebecca Everhart of Carrollton, Father, Jake (Mary) DeGarmo of Carrollton, sisters Meneely DeGarmo, Miranda DeGarmo, Courtney Merrin and Mackenzie DeGarmo. Maternal grandfather Ron (Toni) Howes and both maternal great grandmothers, Betty Howes and Jane Warner. Loving aunts, Stephanie Johnson, Stacie (Clyde) Bailie, Ron-Michelle (Brian) Ruckman, Wanda (Joel) Ignace, Darlene Kerwood, and Pinkie (Ronnie) Grim, as well as his numerous cousins and his forever friends Olivia Kienzle, Bailey McKarns, Olan Domer, Sam Soisson and so many more. Jared is preceded in death by his maternal grandmother Nancy Howes, paternal grandparents Nen and Pap and his beloved friend and cousin, Jason Tubaugh. We would like to welcome the community to Jared’s Celebration of Life Ceremony on September 18th, 2020, which would have been Jared’s 19th birthday. The event will be hosted at the Bluebird Amphitheater in Carrollton, Ohio from 3pm until dark. There will be no program, and you are welcome to stop by for as little or long as you'd like. Jared was a fashion icon so there are no expectations around attire, just whatever seems right for you. In lieu of flowers, we are asking for donations to be sent to the Performing Arts of Carrollton High School. Donations can be sent to “CHS FFDA” P.O. Box 484, Carrollton, Ohio 44615. “He lives in you. He lives in me. He watches over everything we see. Into the water, into the truth. In your reflection, he lives in you.” - Rafiki, The Lion King.

Jared Devin DeGarmo entered the stage on September 18th, 2001. He was unapologetically himself, fiercely unique, and had a theatrical singing voice he loved to use anytime, anywhere. Jared believed in the power of positivity. He was accepting... View Obituary & Service Information

The family of Jared Devin DeGarmo created this Life Tributes page to make it easy to share your memories.

Send flowers to the DeGarmo family.