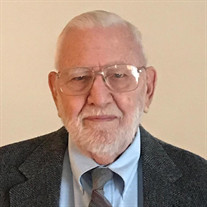 Dr. Jack L. Maffett, 88, of Carrollton, passed away on January 17, 2021, at Minerva Healthcare in Minerva, Ohio. A son of the late Alfred and Dorothy Hess Maffett, he was born April 19, 1932 in Canton, Ohio. Dr. Maffett was Board-Certified in Family Medicine, served as an Associate Clinical Professor of Preventive Medicine and Family Practice at The Ohio State University, and was an Associate Clinical Professor of Family Practice at the Northeast Ohio Universities College of Medicine (now the Northeast Ohio Medical University). Dr. Maffett was a proud member of the Ohio Academy of Family Practice and American Academy of Family Practice. Dr. Maffett graduated from Carrollton High School in 1950 and later graduated from Kent State University in 1954. Jack then attended the Cincinnati College of Medicine, where he graduated in the top 10% of his class; however, while Dr. Maffett was devoted to his studies and attained the rank of Captain with the Army Medical Corps, his greatest accomplishment during medical school was meeting his late wife, Helen (Watson) Maffett. Jack and Helen married June 19, 1957. Together, they opened a medical practice in Carrollton in 1958, which continued through 2000. Dr. Maffett served his community as a boy scout leader; he also devoted 15 years as the County Health Commissioner, and an additional 9 years as County Coroner. In 2019 Dr. Maffett was honored with induction into the Carrollton High School Alumni Hall of Fame for his work in the medical field. Proud of his Scottish Heritage, Jack was a past President of the Carroll County Scottish Caledonian Society. Jack was a member of Resurrection Lutheran Church in Malvern. Dr. Maffett was known around the community for his curious mind, quick wit, compassionate heart, and tireless work ethic. Jack and Helen were pillars of their community (at least in the eyes of their grandchildren – wait: did Jack write this?). A trip to any restaurant, gas station, or grocery store would lead to an introduction to one or two former patients, which always resulted in a kind word or a hearty laugh. Jack and Helen enjoyed retirement by traveling, fishing, and gardening. Jack is survived by three sons: Mike (Diane) Maffett of Bergholz; Tom (Cathy) Maffett of Malvern; and Jon (Michelle) Maffett of Pickerington. Jack is also survived by nine grandchildren: Charissa, Matthew, Bradley, Kelli, Sean, Drewanne, Colin, Morgan, and Katherine; and two great grandchildren: Rachel and Tori. Dr. Maffett is also survived by his brother, Bob Maffett, of Jekyll Island, Georgia. A private family service will be held.

Dr. Jack L. Maffett, 88, of Carrollton, passed away on January 17, 2021, at Minerva Healthcare in Minerva, Ohio. A son of the late Alfred and Dorothy Hess Maffett, he was born April 19, 1932 in Canton, Ohio. Dr. Maffett was Board-Certified... View Obituary & Service Information

The family of Dr. Jack L. Maffett created this Life Tributes page to make it easy to share your memories.

Send flowers to the Maffett family.