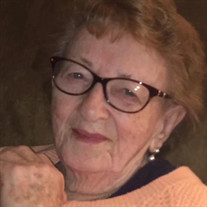 Isabel Benington, 94, of Carollton, Ohio, died Friday evening April 10, 2020 in her home after a long battle with cancer. She was the daughter of the late Arthur E. and Beulah Wigal Millhorn, born January 27, 1926 near Tappan, Ohio. The family moved to Carrollton in 1936 because of the building of Tappan Dam. She was a 1944 graduate of Carrollton High School. Upon graduation she joined the Cadet Nursing Corps, during WWII, and graduated from Aultman Hospital School of Nursing in 1947. A registered nurse, she worked for many years, first at Aultman Hospital, and then in the local area at nursing homes, private duty, the late Dr. T.J. Atchison, Visiting Nurses, and the Health Department. She was also a nurse consultant for East Carroll Nursing Home for five years and later on the human rights committee. She was an active member of the Church of Christ, Christian and a member of the choir for over 50 years. Her member ships also included the Red Hats “Fiesty Ladies”, The Lunch Bunch, Hospice Breakfast Bunch, and Tuesday Quilters at the Friendship Center. She enjoyed many crafts including sewing, quilting, crocheting, knitting, and jewelry making. Isabel married Edgar A. Benington, June 24, 1947, and he preceded her in death, January 29, 2003. Also preceding her in death was an infant daughter. She is survived by two sons, Mark Benington and Kelly Benington both of Carrollton; two daughters, Elaine (Mark) McCullough of Carrollton and Janet (Robert) Sickler of Urbana, Illinois; nine grandchildren, Nathan and Isaac McCullough, Jeremy and Justin Benington, Holly, Aaron and Laura Benington, Jordan Horn and Paige Sickler; and nine great grandchildren. She led a full life and enjoyed her family and friends. Her blessings were many! In the interest of public health there will be no public services at this time. The family will hold a public memorial service at a later date. In lieu of flowers the family wishes donations be made in Isabel’s name to Community Hospice, 716 Commercial Ave SW, New Philadelphia, Ohio 44663.

Isabel Benington, 94, of Carollton, Ohio, died Friday evening April 10, 2020 in her home after a long battle with cancer. She was the daughter of the late Arthur E. and Beulah Wigal Millhorn, born January 27, 1926 near Tappan, Ohio. The... View Obituary & Service Information

The family of Isabel Benington created this Life Tributes page to make it easy to share your memories.

Send flowers to the Benington family.