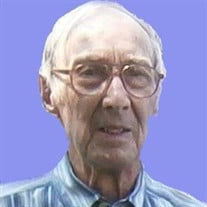 Herman Loyd Miller, 95, of Carrollton passed away peacefully on January 4, 2021 at the Carroll Golden Age Retreat. The youngest son of the late Clarence and Mildred (Reigle) Miller, he was born in Union Township (Waterloo), Carroll County, Ohio. He was preceded in death by his wife of sixty nine years Gertrude, youngest son Mark and brother Carl. He is survived by their sons Richard (Shirley) and Earl (Carol); daughter-in-law Doris; five grandchildren, Ryan (Alison), Jacob (Hannah), Keith (Diem), Morgan and Tanner; and great grandchild Savannah. Herman loved his family especially his grandchildren and had many close friendships he cherished. He enjoyed attending his Carrollton High School class reunions and had a passion for antique automobiles and trucks, volunteering at the Algonquin Mill Fall Festival, telling stories and researching family genealogy and the history of Carrollton and Carroll County. He was a Navy veteran of World War II, serving for a time as an aviation machinist's mate on the aircraft carrier USS Saratoga (CV-3). Herman was retired from the Columbia Gas Company of Ohio and was a member of the Carrollton First Presbyterian Church and Carroll County Historical Society. He was an inductee to the Carrollton High School Athletic Hall of Fame as a manager on the 1940 Carrollton High School Varsity Football Team. According to his wishes there will be a private service with interment in Westview Cemetery. In lieu of flowers to the family, memorial donations may be made to the Carrollton First Presbyterian Church, Carroll County Historical Society or Community Hospice. The family extends a heartfelt thank you to the Carroll Golden Age Retreat staff for their outstanding care and love for Herman and to his Hospice nurse for his compassionate care during Herman's final days.

Herman Loyd Miller, 95, of Carrollton passed away peacefully on January 4, 2021 at the Carroll Golden Age Retreat. The youngest son of the late Clarence and Mildred (Reigle) Miller, he was born in Union Township (Waterloo), Carroll County,... View Obituary & Service Information

The family of Herman Loyd Miller created this Life Tributes page to make it easy to share your memories.

Send flowers to the Miller family.