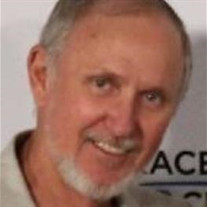 Lieutenant Colonel H. Daniel Stout, 71, of Carrollton passed away September 11, 2019 in Cleveland, Ohio. Dan was born in 1948 in West Virginia. A graduate of Carrollton High School, he was a member of the basketball and baseball teams. He received a letter of intent to play baseball at Ohio University where he graduated with a Bachelor of Science Degree in Physical Education in 1971. He taught elementary physical education, and later GED classes to maximum-security prison inmates. Dan entered the Air Force in 1975, as enlisted serving four years then leaving to attend the University of Pittsburgh, where he received a Bachelor of Science Physical Therapy degree. He re-entered the Air Force as a 2nd Lieutenant. He attended Webster University, graduating with a Master of Art, Human Resources Development degree. Dan was a training Honor Graduate, received Hospital Company Grade Officer of the Year in 1988, Company Grade Physical Therapist of the Year in 1993, Air Combat Command Field Grade Physical Therapist of the Year 1994. In 2003, Dan retired from the Air-Force with 28 years of service to this great country that he loved so dearly. Dan was a lifetime member of MOAA, he attended the Carrollton Bible Chapel, member of Fort Walton Chapter of the American Legion. He laughed, loved and enjoyed people and life. Dan was preceded in death by his parents, Cecil and Mary Stout, and brother, Elwood “Woody.” He is survived by his wife, Bonnie Shaw-Stout; children, Adam Stout and Jenna Miles both of Virginia; two sisters, Joyce Clark of Michigan and Regina Grygo of Toronto; a brother, David of Kensington; four grandchildren; and Bonnie’s family, four grandchildren, nine grandchildren, and four great grandchildren. Funeral services will be Friday, September 20, 2019 at 11 a.m. in the Carrollton Bible Chapel with Rev. Dr. Chuck Wilson officiating. Burial will follow in Westview Cemetery with full military honors. Visitation will be Thursday evening from 6-8 p.m. in Dodds Funeral Home of Carrollton and Friday from 10 a.m. until time of services in the Bible Chapel. Donations in Dan’s name can be given to Save22 Veterans, @save22suicide, awareness and prevention.

Lieutenant Colonel H. Daniel Stout, 71, of Carrollton passed away September 11, 2019 in Cleveland, Ohio. Dan was born in 1948 in West Virginia. A graduate of Carrollton High School, he was a member of the basketball and baseball teams. He received... View Obituary & Service Information

The family of H. Daniel Stout created this Life Tributes page to make it easy to share your memories.

Send flowers to the Stout family.