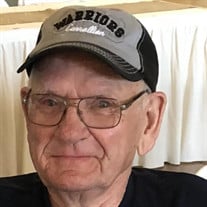 Gerald “Jerry” H. Snyder, 88, of Carrollton passed away Monday morning November 22, 2021 at Mercy Medical Center in Canton. A son of the late William and Mary Hershberger Snyder, he was born September 10, 1933 in Massillon. Jerry loved sports. He was a coach of several different sports for kids of all ages in the Carrollton and Minerva area. When he wasn’t coaching or watching sports, he enjoyed spending time with his family, mowing, playing cards or golfing. He also served in the Army during the Korean War. He is survived by his wife of 53 years, the former Shirley Rossey; stepson, Rick (Janice) Pyles of Carrollton; four grandchildren; Jessa (Ben), Alissa (Doug), Zane (Allison), Zara (Dean), two great grandchildren; Brantley and Weston and a brother, Vern Snyder of East Canton. Along with his parents, he was preceded in death by his son, Douglas, four brothers and ten sisters. Funeral services will be Friday, November 26, 2021 at noon in Dodds Funeral Home of Carrollton with Rev. Jim Painting officiating. Burial will follow at Westview Cemetery in Carrollton. Visitation will be Friday from 11 a.m. until time of services in the funeral home. In lieu of flowers the family wishes donations be made in Jerry’s name to the Carrollton Athletic Booster Club, 205 Scio Road Se, Carrollton, Ohio 44615.

The family of Gerald "Jerry" H. Snyder created this Life Tributes page to make it easy to share your memories.

Send flowers to the Snyder family.