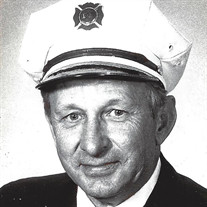 George Bair, 87, of Carollton, passed away March 18, 2017. Born February 8, 1930 in Dover, he was the son of George and Helen Knisley Bair. George spent a passionate 31 years with the Dover Fire Department. He rose to the rank of Lieutenant in 1962, Captain in 1966, and was appointed Chief on March 21, 1977. George served as a Sate Certified Fire Instructor, teaching fire training in Tuscarawas, Stark, Wayne, Holmes, Muskingum, Harrison, Jefferson, and Belmont counties. He spent years lecturing on fire prevention with his “House of Hazards.” He was instrumental in integrating ambulance service with the Fire Department. George was the first person from Tuscarawas County to graduate from the Stark County School of Paramedics. He also served on the Board of Directors of the Dover Red Cross, Tuscarawas County Cancer Society and Heart Association, and was county chairman of the Muscular Dystrophy Association. Following his retirement, George worked for Atwood Lodge, served as Chief of the Dellroy Volunteer Fire Department and had a busy handy man business as he was an accomplished carpenter, plumber and electrician. He continued his service volunteering at local schools, teaching children fire safety tips and for the Red Cross in Dover. George is survived by his wife of 30 years, Betsy; five children, Tiffany (Travis) Faulkner, Kenny (Sandy) Bair, Gary (Jill) Bair, Sharon (John Hanlon) Ayers and Debbie (Denny) Vitt; two sisters, Frances Moser and Alice Jean Minnis; seven grandchildren; eleven great grandchildren and numerous nieces and nephews. He was loved and will be greatly missed. George was a member of Our Lady of Mercy Catholic Church and the Ohio Fire Chiefs Association. Mass of Christian Burial will be at Our Lady of Mercy Catholic Church in Carrollton on Thursday, March 23, 2017 at 11:00 a.m. with visitation an hour before the service. Memorials may be sent to the Building Fund of Our Lady of Mercy, P.O. Box 155, Carrollton, Ohio 44615.

George Bair, 87, of Carollton, passed away March 18, 2017. Born February 8, 1930 in Dover, he was the son of George and Helen Knisley Bair. George spent a passionate 31 years with the Dover Fire Department. He rose to the rank of Lieutenant... View Obituary & Service Information

The family of George Bair created this Life Tributes page to make it easy to share your memories.

Send flowers to the Bair family.