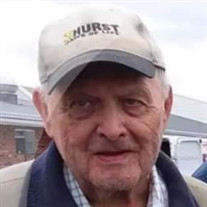 Gary D. Wagner, 87, of Carrollton, passed away Friday evening August 14, 2020 at the Carroll Golden Age Retreat in Carrollton. A son of the late W. Emmet and Florence Kirby Wagner, he was born January 3, 1933 in Perrysville, Ohio. Gary owned and operated Wagner Auto Sales for over thirty years. He loved getting a good deal and making a good sale. He also worked at the Carroll Journal Newspaper, running press and type setting. He was a talented wood worker, from working construction, to helping his family with building projects, to making knick-knacks that he would often share with those he loved. He had a soft spot for animals, including his dogs, goats, and cats. His cat, Wallace, brought him much comfort and companionship in his final years at home. He is survived by his five children, Terry Wagner, Rick (Sharon) Wagner, Cheryl (Ted) Miller, Bob (June) Wagner, Julie (Brian) Arbogast; ten grandchildren, Marcy (Jeff) Robison, Kevin (Sarah) Wagner, Olivia Wagner, Morgan Wagner, Mark (Sarah) Wagner, Michelle (Mursel) Kilickiran, Melissa (Ryan) Stanton, Eric (Brittany) Wagner, Benjamin and Samantha Arbogast; fourteen great-grandchildren, Hannah and Ella Robison, Dean, Andon, Ansley, and Grant Wagner, Kyleigh Haueter, Easton and Nash Wagner, Asher, Parker, and Emsley Stanton, and Evie and Evan Wagner. He delighted in each of them, and they always made him light up when they would visit. He could have a tough, “gruff,” exterior, but he had a tender and caring heart. If he picked on you, that was a sure sign that he loved you. Along with his parents he was preceded in death by his wife of 65 years, Dolores Marie (Sell) Wagner, in 2017, a brother, Ronnie Wagner, and great-grandson, Eli Wagner. A public graveside service will be held Wednesday, August 19, 2020 at 10 a.m. at Westview Cemetery in Carrollton with Rev. Kimberly Arbaugh officiating. In lieu of flowers the family asks that donations be made in Gary’s name to Community Hospice, 716 Commercial Ave SW, New Philadelphia, Ohio 44663.

The family of Gary D. Wagner created this Life Tributes page to make it easy to share your memories.

Send flowers to the Wagner family.