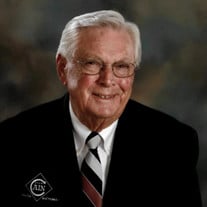 Gary W Cain, age 81, of East Springfield, Ohio passed away peacefully on February 4, 2019 at Trinity West Hospital in Steubenville. He was born October 17, 1937 at his home in East Springfield to the late Wendell and Audrey Cain. He is survived by his wife of 61 years, Margaret (Edwards) Cain who he married on September 15, 1957, a son Brad L. (Tammy) Cain and son-in-law Joe DeBold all of East Springfield, 5 grandchildren – Allison (Scott) Pickett, Devin (Chad) Litten, Taylor (Emily) Cain, Eric DeBold, and Shaylyn Cain (Gabe McCarthy), and 2 great-grandchildren – Grayson and Madison Pickett. He was preceded in death by his daughter, Michele (Cain) DeBold in 2015. He was a 1955 graduate of Springfield High School and immediately following graduation, pursued his dream of receiving his Certified Auctioneers license. He went on to become a licensed Realtor and started Gary W. Cain Realtors and Auctioneers in 1967 servicing Ohio, West Virginia and Pennsylvania. Following in his footsteps, both his son and grandson went on to become licensed Realtors and joined the family business. Throughout his career he served as President of the Steubenville Board of Realtors; Ohio Association of Realtors District 2 Vice President and led several committees; and President of the Ohio Auctioneers Association in 1975. His success in business led him to be the recipient of many prestigious honors including Realtor of the Year for the Steubenville Board of Realtors multiples times; Distinguished Service Award for the Ohio Association of Realtors; inducted into the Ohio Auctioneers Hall of Fame in 1993; Jefferson County Chamber of Commerce Businessperson of the Year 2008 and Lifetime Achievement Award recipient 2015; and inducted into the East Central Association of Realtors Hall of Fame in 2018. He was a lifetime member of the Christ United Methodist Church in East Sprinfield and held many offices in both his local church and in the Eastern Ohio Methodist Conference. In addition to faith and family, he was an avid hunter who traveled the world including taking 2 safari trips to Africa. He had a love of all animals but especially enjoyed riding his horse Knight. He was always looking for the next adventure which included going skydiving on his 70th birthday. His civic activities included Chairman of the Jefferson County Chamber of Commerce, Franciscan University Advisory Board, Member of the Unionport Masonic Lodge, Steubenville Rotary Club President, Edison Local Board of Education, Steubenville City of Murals Committee, member of the Jefferson County Port Authority and for over 60 years conducted the Jefferson County 4-H Sale of Champions. The funeral will be held at the Christ United Methodist Church in East Springfield at 11:00am on Friday, February 8, 2019 with the Rev. Greg Bush officiating. Burial will follow at the East Springfield Cemetery. Visitation will be at Dodds Funeral Home in Amsterdam on Thursday, February 7, 2019 from 4:00-8:00pm and on Friday from 10:00-11:00am at the East Springfield United Methodist Church. In lieu of flowers, donations may be made in his memory to the Christ United Methodist Church, PO Box 127 East Springfield, Ohio 43925.

Gary W Cain, age 81, of East Springfield, Ohio passed away peacefully on February 4, 2019 at Trinity West Hospital in Steubenville. He was born October 17, 1937 at his home in East Springfield to the late Wendell and Audrey Cain. He is survived... View Obituary & Service Information

The family of Gary W. Cain created this Life Tributes page to make it easy to share your memories.

Send flowers to the Cain family.