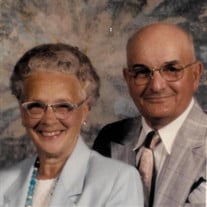 Esther Rosa Sukosd, 103, of Carrollton (formerly of East Canton) went to be with her Savior on August 21, 2020 at Centreville Assisted Living. Esther was born in Burgezd, Hungary on August 17, 1917. She was adopted at age 3, coming through Ellis Island to American in 1921. One of Esther’s proudest moments was getting her citizenship papers at age 18. In 1936, she graduated from McKinley High School, where she later came back in 1956 to teach English to Hungarian refugees escaping the revolution. Esther was an active member for 79 years at her church in Canton, serving as a long time Sunday School teacher, trustee, and writer of the church’s history. When moving to Carrollton in 2002, she became a member of the Carrollton First United Methodist Church. Esther was past president of the Ohio State Mother’s Association of Stark County, a registered interpreter at the Canton Public Library, recording secretary of the Stark County International Festival, and a past member of the East Canton Rotary, and Osnaburg Historical Society. She gave numerous talks to organizations and churches, talking about her native Hungary and her journey through Ellis Island. Since moving to Carrollton, she became an honorary member of the Carrollton Rotary, an honor she truly loved. She was also a member of the Carrollton Book Club and Red Hat Society. In 1944, she married the fellow she had her eyes on since age 5, Joe Sukosd, following him to the Army Air Force base in Las Vegas where she worked in payroll. Upon returning to East Canton, she became and executive secretary at Macomber Steel, at the same time taking over the office duties for her husband’s excavating business till his death in 1992. Her hobbies were fishing, reading, gardening and traveling. She was also a big fan of playing the slots. Esther was a loving, giving and inspirational mother and grandmother. She is survived by her daughter, Rosalee Sukosd Davis, and grandson, Matt Davis, both of Carrollton. A graveside service will be held Friday, August 28, 2020 at 11 a.m. at Forest Hills Cemetery in Canton with Rev. Kimberly Arbaugh officiating. Memorial donations may be given to the Carrollton First United Methodist Church, 253 S. Lisbon Street, Carrollton, OH 44615, or the Carrollton Animal Protection League, Box 353, Carrollton, OH 44615. The family wants to extend a heartfelt thank you to Centreville Assisted Living staff for their outstanding care of and love for Esther.

Esther Rosa Sukosd, 103, of Carrollton (formerly of East Canton) went to be with her Savior on August 21, 2020 at Centreville Assisted Living. Esther was born in Burgezd, Hungary on August 17, 1917. She was adopted at age 3, coming through... View Obituary & Service Information

The family of Esther Rosa Sukosd created this Life Tributes page to make it easy to share your memories.

Send flowers to the Sukosd family.