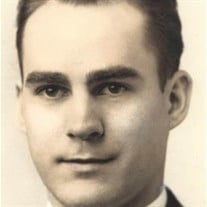 Edmund Ernest Malzan, 96, of Carrollton, fell asleep in death Monday January 30, 2017. Born February 10, 1920 in Cleveland, Ohio to the late Olga Weuland Malzan (Cipolla) and Edmund Christopher Malzan, he was one of nine children. He met his late wife, Mary Smerglia, of 70 years through friends when they were teenagers. Together they are survived by their two children, Rebecca (Art) Sheck of Minerva, and Edmund John (Diane) Malzan of Florida. In time, Ed and his wife Mary loved and were blessed with ten grandchildren and eleven great grandchildren. Along with his parents he was preceded in death by a grandson, Benjamin P. Malzan, and two great grandchildren, Hayden and Shaine Sheck. Ed was an industrious worker. He was a carpenter by trade. He was known for his sense of humor, love of the Bible, love of family and being a hard worker. One of Ed’s greatest joys was sharing and expressing his faith to others as a member of the Kingdom Hall of Jehovah’s Witnesses. As a young adult, Ed started studying the Bible and dedicated his life to Jehovah in St Louis, Missouri in 1941 along with his wife. Not long after his marriage and baptism, Ed was sent to prison in Millpoint, West Virginia because of having a neutral stand in political affairs. He took a firm stand for his belief in a Creator and love for others. During this time, Ed gained many close friendships with other Jehovah’s Witnesses that shared his beliefs. He has been known to say it was one of the best times of his life. Ed and Mary taught their two children and many grandchildren to live according to the Bible and the hope it holds for our near future. The family has faith in the words found at Revelation 21:3, 4: “And he will wipe every tear from their eyes, and death will be no more, neither will mourning nor outcry nor pain be anymore. The former things have passed away.” Family and friends will gather for a memorial service on Sunday, February 5, 2017, at 4pm at the Kingdom Hall of Jehovah’s Witnesses, 515 Steubenville Road, Carrollton, Ohio 44615.

The family of Edmund Ernest Malzan created this Life Tributes page to make it easy to share your memories.

Send flowers to the Malzan family.