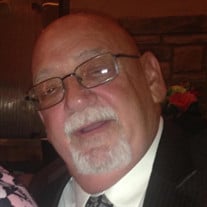 Donald James Griffith, 70, of Amsterdam, Ohio passed away peacefully at Valley Hospice in Steubenville on June 19, 2020. Don was born on August 24, 1949 in Steubenville, son of the late James Lewis Griffith of Bergholz and Dorothy (Stewart) Conn. He is survived by his loving wife of almost 50 years, Judy (Sweat) Griffith of the home; one daughter, Derendia (Griffith) Morgan; a son, Darrick Griffith; two grandchildren, Hayley Talkington and Tyler Griffith; three brothers, Harold (Darlene) Griffith, James (Bonnie) Griffith, and Jerry Griffith; two step sisters, Ophelia Sines and Debbie Wagner; and step mother, Mable Griffith. He was preceded in death by his great grandson, Jackson Allender, and brother, Charles Griffith. Don served in the US Army, serving time overseas in Korea. He worked at Nelms #2 Coalmine in Hopedale for 18 ½ years and Ball Corporation in Weirton, WV for over 25 years. He was a member of Pilgrim Lodge #691 F. & A.M. in Steubenville, Valley of Steubenville A.A.S.R., and the Aladdin Shrine in Columbus, where he was a member of the motor patrol. Don also held memberships in the Order of the Eastern Star #360 in Unionport. One of his greatest joys was having both his children as neighbors and watching both of his grandchildren grow up. His greatest loves were his family, BBQ’s, playing and watching sports with his boys, cornhole, fishing, camping, hunting, working with his son and buddies, and taking care of his girls. He is leaving us with many broken hearts, but so many wonderful memories. He was loved by all who knew him and will be deeply missed. A public graveside service will be held Wednesday, June 24, 2020 at 6 p.m. in Bergholz Cemetery with full military honors provided by the VFW, DAV, and American Legion.

Donald James Griffith, 70, of Amsterdam, Ohio passed away peacefully at Valley Hospice in Steubenville on June 19, 2020. Don was born on August 24, 1949 in Steubenville, son of the late James Lewis Griffith of Bergholz and Dorothy (Stewart)... View Obituary & Service Information

The family of Donald James Griffith created this Life Tributes page to make it easy to share your memories.

Send flowers to the Griffith family.