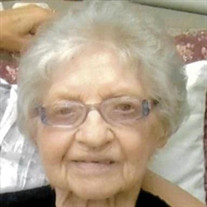 Cicely Worthington, 92, of Carrollton, formerly of Amsterdam, passed away October 14, 2018 in Centreville Village following an extended illness. She was born May 14, 1926 in Wolf Run, Ohio, and was the daughter of the late Edward and Adelaide Williams Worthington. She was a member of the Amsterdam Church of God and attended the First Presbyterian Church of Carrollton, where she served as youth leader. Cicely was a member of the Carroll County Retired Teachers Association, Amsterdam Woman’s Club, and a 50 year member of Alpha Mu of Delta Kappa Gamma. She graduated from Bethany College, received her Master’s Degree from the University of Pittsburgh and also attended the University of Valencia in Spain. She was a much loved English and Spanish teacher at Springfield High School and retired in 1984 after 33 years. She is survived by two nieces, Mrs. Sandy (Dale) Rininger of Carrollton and Mrs. Nancy (Bruce) Lindemann of Houston, Texas; two great nieces and nephews, Mrs. Trina (Brad) Croft of New Philadelphia and Beth Handly of Houston, Texas; a great nephew, Bradley Stone of Portland, Oregon; three great great nephews, Corbin Croft, Travis Croft, and Nathan Croft of New Philadelphia. She also leaves behind many, many cherished friends. Along with her parents she was preceded in death by a sister, Bessie Jane Warner on December 20, 1989; two brothers, Jack Worthington during World War II and Edward Worthington on February 13, 1990; and a special niece, Cicely Ann Engler on February 15, 1993. Funeral services will be Thursday, October 18, 2018 at 11 a.m. in the First Presbyterian Church of Carrollton with Pastor Vernon Shepherd officiating. Burial will follow at Ft. Steuben Burial Estates in Wintersville. Visitation will be Wednesday from noon till 2 p.m. and 4-6 p.m. at the First Presbyterian Church in Carrollton. Memorial donations may be made in Cicely’s memory to “Cicely’s Closet,” in care of the First Presbyterian Church in Carrollton, 200 N Lisbon St., Carrollton, Ohio 44615.

Cicely Worthington, 92, of Carrollton, formerly of Amsterdam, passed away October 14, 2018 in Centreville Village following an extended illness. She was born May 14, 1926 in Wolf Run, Ohio, and was the daughter of the late Edward and Adelaide... View Obituary & Service Information

The family of Cicely Worthington created this Life Tributes page to make it easy to share your memories.

Send flowers to the Worthington family.