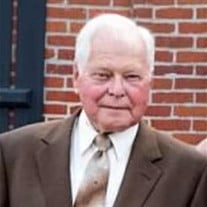 Charles “Chuck” T. Howell, 87, of Carrollton, passed away peacefully on January 10, 2022 at Centreville Village in Carrollton. His son was at his bedside. The oldest child of the late Fred and Margaret (Newburn) Howell, he was born on January 9, 1935, on his grandparents’ farm outside of Bloomingdale, Ohio. Chuck attended Amsterdam High School through his sophomore year, and graduated from Carrollton High School in 1952. He was a veteran of the US Army, and worked as a superintendent at Weirton Steel for 37 years before retiring in 1992. Not one to rest, Chuck spent his retirement working part time at both Ace Hardware and Dodds Funeral Home. He was a long time member of The First Presbyterian Church of Carrollton, where he served in various leadership roles and rang the bell every Sunday. He was a proud father and grandfather, and took on an active daily role in raising them. In the final two years of his life, his greatest joy was his first great grandchild, whom he spoke with daily. Chuck enjoyed spending his free time perfecting his golf swing (where he earned three confirmed hole in ones), tinkering in the garage, attending CHS sporting events, and growing the world’s best tomatoes. You could find him most mornings drinking a coffee at the local McDonalds, surrounded by friends. Chuck is preceded in death by his beloved wife of 63 years, Donna (Frengel) Howell; and four siblings: Mark Howell, Carole Howell, Galen Howell, and Rick Howell. He is survived by his son, Charles “Chuck” F. Howell; two grandchildren, Kevin Howell and Kristen (Josh Green) Howell; one great-granddaughter, Ava Green; and three brothers: Harold Howell, Dale Howell, and Darrel Howell. Calling hours will be held at Dodds Funeral Home on Wednesday, January 19th from12-1pm. A service and burial will follow. In lieu of flowers, a donation can be made to The Carrollton High School Athletic Department.

Charles &#8220;Chuck&#8221; T. Howell, 87, of Carrollton, passed away peacefully on January 10, 2022 at Centreville Village in Carrollton. His son was at his bedside. The oldest child of the late Fred and Margaret (Newburn) Howell, he was... View Obituary & Service Information

The family of Charles "Chuck" T. Howell created this Life Tributes page to make it easy to share your memories.

Send flowers to the Howell family.