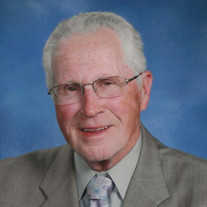 Bruce E. Brace was welcomed into Heaven on September 30, 2021, following a long battle with Alzheimer’s. He and his wife, Lois, celebrated their 70th anniversary earlier this year. A city boy who married a country girl moved to their Washington Township farm in 1956. His generosity welcomed many into their Christian hospitality. He served most of his life as a teacher and elder at Augusta Christian Church and was instrumental at starting and serving the Fellowship of Christian Farmers, International in Ohio. Many in Augusta will remember Bruce as Assistant Football Coach to Ora Ford. Many in Carrollton will remember his devotion to the wrestling team; assisting Coaches Rusty Bright and Ralph Lloyd to mobilize donors for the team’s first wrestling mats. Many will remember Bruce as a trusted coworker at Carrollton Manufacturing, Echo, the railroad and later years in the oil fields of Witco and Belden Blake. A few may remember his real estate sideline with Tom and Alvie Maple. Publicly he was a farmer, privately he was a faithful husband, respected by his children, a friend to pastors and he provided an inheritance to the third generation. Born May 12, 1932, to the late Guy and Francis Brace of Portage Lakes, he was preceded in death by his brother, Guy, husband to Erna Brace of Malvern. He is survived by his wife, Lois, and four children, Todd (Ellen), Timothy (Pat), Kay Roof and Don (Rosemary); eight grandchildren; six great grandchildren; and one great, great grandchild. Bruce loved Jesus, his family and neighbors. He will be remembered well. Special appreciation is deserved to Hospice staff and members of the Malvern Christian Church for their loving care to Bruce, Lois, and family during his illness. A public graveside service is planned due to COVID concerns, on Tuesday, October 5, 2021 at 11 a.m. in the Augusta Cemetery, Augusta, Ohio 44607. In lieu of flowers, donations can be made to Community Hospice, 704 Canton Road NW, Carrollton, OH 44615, and/or First Christian Church of Malvern, 4046 Coral Road, Malvern, OH 44644.

Bruce E. Brace was welcomed into Heaven on September 30, 2021, following a long battle with Alzheimer&#8217;s. He and his wife, Lois, celebrated their 70th anniversary earlier this year. A city boy who married a country girl moved to their Washington... View Obituary & Service Information

The family of Bruce E. Brace created this Life Tributes page to make it easy to share your memories.

Send flowers to the Brace family.