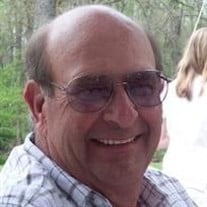 Bill “Pop” Enterline, 76, of Carrollton passed away Wednesday afternoon February 1, 2017 at Mercy Medical Center in Canton, Ohio. A son of the late Richard and Ruth Lewis Enterline, he was born August 25, 1940 in Punxsutawney, Pennsylvania. Bill was retired from Adelman’s Truck Parts in Canton after 17 years. He was a member of the Carrollton Eagles, where he was a Golden Eagle with over 35 years of membership. Bill was known as a family man who loved nothing more than traveling and just being with his family. Anyone who knew him knows that he was a great cookie baker and would always give away all his cookies to family, friends, and coworkers. In recent years Bill was enjoying driving cars for Huebner Chevrolet and Subaru, and looked forward to his weekly euchre game with friends. He is survived by his wife, the former Joan Hippensteel; son, Brad Wheeler of Carrollton; three grandchildren, Jess (Adam) Kansagor of Greenville, North Carolina, Janna Wheeler of Columbus, Brad Wheeler of Carrollton; great granddaughter, Zoe Kansagor; and two brothers, Harold Enterline of New Waterford, Ohio and Homer Enterline of Punxsutawney, Pennsylvania. Along with his parents he was preceded in death by two brothers and three sisters. A memorial service in Bill’s name will be Saturday, February 18, 2017 at 3 p.m. at Dodds Funeral Home in Carrollton. Visitation will be from 1 p.m. until time of service. In lieu of flowers the family wishes donations be made in Bill’s name to St. Jude’s, P.O. Box 1000, Dept. 142, Memphis, Tennessee 38148-0142, or the Bluebird Farms Park District, 190 Alamo Road SE, Carrollton, Ohio 44615.

The family of Bill "Pop" Enterline created this Life Tributes page to make it easy to share your memories.

Send flowers to the Enterline family.