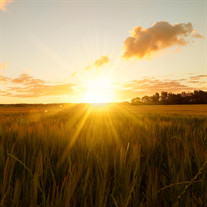 Arthur Rummell, 94, of Carrollton passed away July 31, 2018 at Aultman Center for Compassionate Care. The second son of the late David and Anne Orr Rummell, he was born on the family farm in Freesburg, Ohio on December 27, 1923. He was raised on that farm and also worked with his father and brothers in the lumber business. Art graduated from Minerva High School, where he was a member of the National Honor Society and the winning State Dairy Judging Team in 1944. He went on to marry the former Naomi Ray, who preceded him in death on March 1, 2013. They moved to the 138 acre farm in Center Township. Carroll County, previously owned by her family, where they raised their children, Ray (Ronda) of Sherrodsville, Alan of Dellroy, Lee (Becky) of Carrollton and Sue (Mike) Little of East Rochester. He has eight grandchildren and eleven great grandchildren. Art was the 4-H advisor of the former Forestry Club, founding member of the Carroll County Drive Yourself Tour, and host of Farmer-For-A-Day many times. He and Naomi were active members of the Herrington Bethel United Methodist Church, where he served in many capacities. He was honored by the Ohio Soil and Water Conservation Districts Hall of Fame for his 28 years of service to the County Board of Supervisors, where he served as chairman many years. An active farming conservationist, he implemented the first “no till” farming in Carroll County. He was a rural letter carrier in the Carrollton and Dellroy area and retired after 26 years of service. In addition to his wife, he was preceded in death by his sister, Dorothy, and brothers, James and Clarence. Funeral services will be Friday, August 3, 2018 at 11 a.m. in Dodds Funeral Home of Carrollton. Burial will follow in Westview Cemetery in Carrollton. Visitation will be Thursday from 6 to 8 p.m. in the funeral home. In lieu of flowers the family requests donations be made to either Herrington Bethel United Methodist Church, 4009 Arbor Road NE, Mechanicstown, Ohio 44651, or Aultman Compassionate Care Center, 2821 Woodlawn Ave NW, Canton, Ohio 44708.

Arthur Rummell, 94, of Carrollton passed away July 31, 2018 at Aultman Center for Compassionate Care. The second son of the late David and Anne Orr Rummell, he was born on the family farm in Freesburg, Ohio on December 27, 1923. He was raised... View Obituary & Service Information

The family of Arthur Rummell created this Life Tributes page to make it easy to share your memories.

Send flowers to the Rummell family.